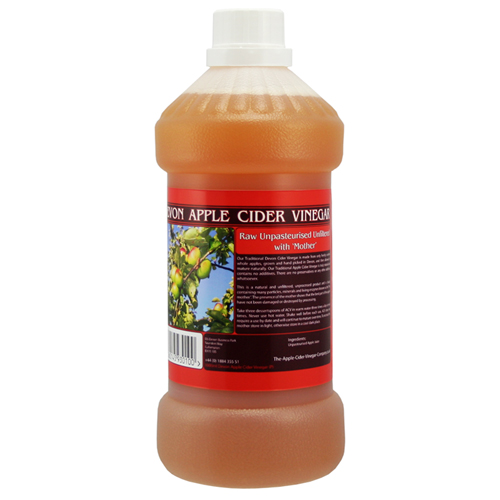 More Details
Apple Cider Vinegar - Original...With Mother...1 Litre
Our most popular Apple Cider Vinegar product. One litre of finest ACV; made in the rolling hills of Devon and supplied in a high quality, non-leaching HDPE bottle.
£6.95
-
+
Add to Basket 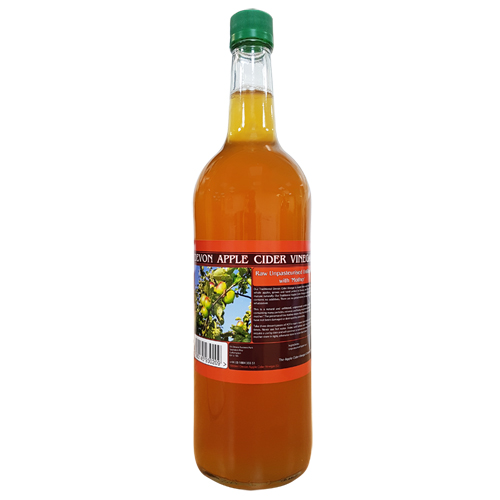 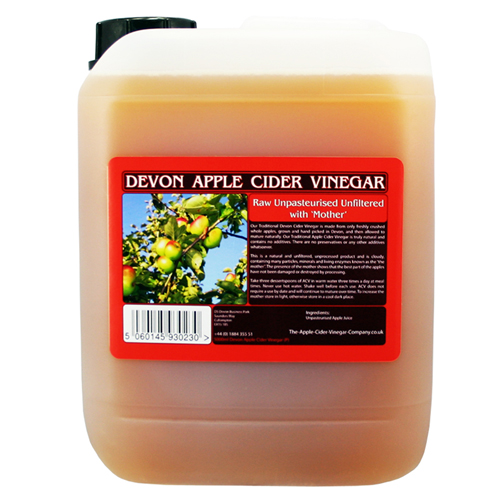 More Details
Apple Cider Vinegar - Large...With Mother...5 Litres
Once you've discovered the amazing benefits of Apple Cider Vinegar, graduate up to our 5 litre pack size. Will keep you fighting fit for the foreseeable future and save you money.
£27.50
-
+
Add to Basket 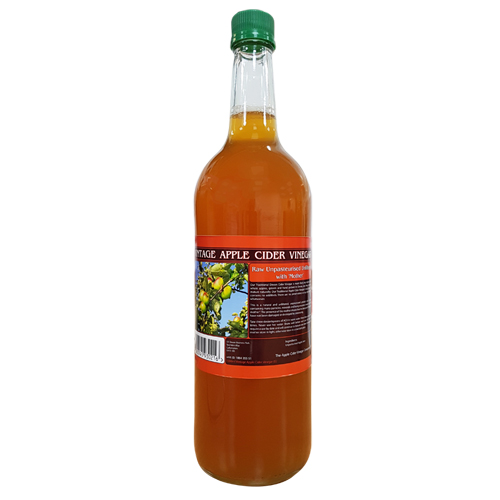 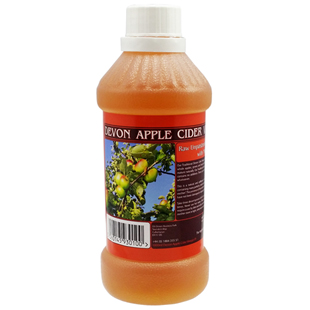 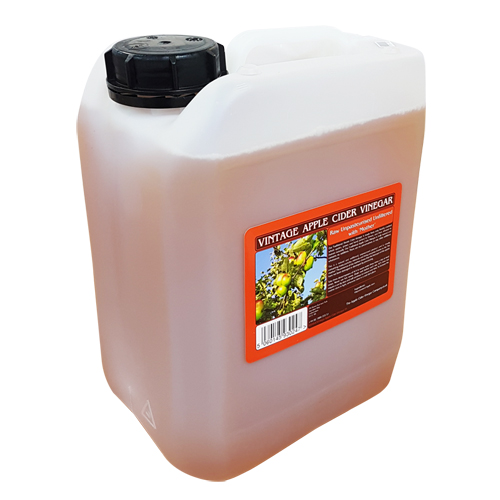 Apple Cider Vinegar - What is it?

Apple Cider Vinegar (ACV) is a traditional health tonic made from fermented apples.


100% organic apples are crushed and the juice is collected. The pure juice undergoes a natural double fermentation process to produce apple cider vinegar.


Using only traditional methods without additives, the natural fermentation process takes quite some time and it is during this time the apple cider vinegar gains its beneficial properties.


Unlike many other types of ACV we only use the first press juice, we never dilute or add water, but most importantly we do not filter and pasteurise the vinegar. Heating the vinegar reduces the nutritional value and filtering results in reduced mineral content. Our ACV is how it should be, raw and free from additives!


Raw Devon Apple Cider Vinegar contains a wide variety of nutrients essential for optimal health. It takes over two years from pressing to be properly matured and it is then bottled ready for sale, still crammed with its beneficial nutrients and beneficial bacteria and enzymes.


To meet strict organic standards, the apples we use from Devon orchards have had absolutely no pesticides or herbicides used on them whatsoever. The vinegar is made under strict conditions using only traditional, tried and tested methods.


Our raw ACV also contains the all important substance known as the 'mother.' This naturally formed jelly like floating matter gives life to the vinegar and is the mother that is responsible for the secondary fermentation. It is present in our raw ACV and bestows many of this ancient tonic's health benefits.


What is the 'Mother' in Apple Cider Vinegar?

The 'Mother of Vinegar' is a natural substance comprised of mostly beneficial bacteria, living enzymes and cellulose created during fermentation. It is a very important nutritional component of real apple cider vinegar because it is densely packed with vitamins and amino acids that can boost general health.


The mother is present throughout our vinegar and often forms into a jelly like substance that you will find floating in the ACV. The aerobic friendly bacteria in the mother flourishes in warm, oxygen rich environments and if left undisturbed for some time it will form a skin on the surface. To the untrained eye it may appear that the vinegar has spoiled or has gone bad when in fact the presence of the mother shows you have a genuine product as it was made and used many centuries ago. For this reason it is commonly removed from almost all other brands of ACV. Traditional remedies call for traditional products and Devon apple cider vinegar is the real deal!


Compare our rich golden ACV to other brands and you will find Devon apple cider is simply the best available. It is very difficult to find genuine, raw unfiltered and unpasteurised vinegar as almost all supermarkets and most health shops stock inferior processed ACV without the mother.


Our exact method of making ACV is a closely guarded secret that is centuries old, but the recipe is simple, pure organic apple juice from rare Devon cider apple varieties and time.


"Commercially produced apple cider vinegar is highly refined and processed and is not a truly traditional ACV".


The amount of mother contained in each bottle of Devon apple cider vinegar varies. Almost all bottles contain a visible formation of mother that can easily be grown by allowing the vinegar to breathe. Simply place your bottle of ACV in a warm place and use an elastic band and cheesecloth seal the opening to prevent any unwanted insects from getting in. Allow a few days and a visible mother formation will appear and if left for weeks or months, a thick skin will form. The use of sulphites and other processing additives in commercially produced ACV will prevent mother from forming. Good quality apple cider vinegar should always have the mother showing that no nasty chemicals are added.

How to use Apple Cider Vinegar


It is most commonly used as a daily dietary supplement. It can be taken off the spoon, or mixed into a tonic using honey or molasses. It can be diluted in cool or warm water, but never hot. Hot water will pasteurise the apple cider vinegar so avoid heating above room temperature.


As well as its use in cuisine, apple cider vinegar can be used for many household purposes. It can be used as a natural descaler for your kettle or water distiller and for removing stains from metal.

You can give apple cider vinegar to your pets and it is particularly useful for dogs, horses and chickens.

A short history of the Medicinal uses of Vinegar

Vinegar has been used in medicine, for cooking and around the home as a cleaning product since ancient times.


One of the first records comes from ancient Assyrian-Babylonian clay tablets which describe a treatment using vinegar for a type of eye disease. 1


The texts of Hippocrates (c. C5th BC), a Greek physician often dubbed as the father of modern medicine2, mentions the use of vinegar for treating a number of ailments. In particular these texts direct the use of vinegar to clean wounds and ulcers3, or to be mixed with honey to make a restorative drink called oxyglyky4.


It was also a popular tonic during Roman times. Roman legionnaires were all issued with a ration of vinegar while on campaign5. This could be mixed with water to make a safe and refreshing drink known as posca, or used as an antiseptic to treat wounds5b. Posca was available to buy on Roman streets6 and used for refreshment in bathing houses7. Posca was also the drink given to Jesus Christ by a Roman soldier to quench his thirst as he lay on the cross8.


During the Black Death, which struck Europe on several occasions from the 14th-18th centuries, vinegar was used in an attempt to prevent the transfer of disease from person to person9. Although it was not known at the time that the main cause of Bubonic Plague was transmission by a flea bite, it was feared that contact with those infected could bring about illness. We now know this was secondary or 'pneumonic plague'10.


The famous nursery rhyme 'Jack and Jill', tells of Jack bumping his head and Jill tumbling after him. A the end of the rhyme Jack's head is bound with vinegar and brown paper, a common treatment for bumps, aches, bruises and swellings11.


There are records of vinegar being used by soldiers to treat drinking water during the American civil war13 and a vinegar solution is still recognised today as a valid antiseptic to treat war wounds by the International Committee of the Red Cross14.

Some of the most promising research into the health benefits of ACV has taken place in the field of type 2 diabetes.


A number of studies have shown that apple cider vinegar can improve blood glucose levels in those suffering from type 2 diabetes as well as people who are healthy or who have signs of pre-diabetes15.


The results of one of these studies showed that people suffering from type 2 diabetes who took apple cider vinegar, when compared to a control group, improved their blood glucose levels by 25%


Even more dramatic was the results from a group of people who had pre-diabetic signs. Their blood glucose levels improved by 50% compared to the control group.

Many of our customers buy our raw and unfiltered ACV to help ease the symptoms of arthritis. It is not known why apple cider vinegar with mother helps relieve the agony of arthritis in so many people, but it has been used for just this for many centuries. One theory is that the ascetic acid in the vinegar helps to break down the build up around joints that causes the stiffness and inflammation. However until proper studies are undertaken we will not truly understand the method of action or effectiveness of taking apple cider for arthritis.


Any questions about apple cider vinegar?

If you have any questions about apple cider vinegar or any of our other products please feel free to contact us by sending an email or calling 01884 33037.